At the recent annual convention of Veterans for Peace, VFP Vice President Jerry Condon said “The US peace movement has been demobilized by disinformation on Syria.”

The first is the demonization of the Syrian leadership.

The second is the romanticization of the opposition.

The third form involves attacking anyone questioning the preceding characterizations.

There is a recent article which exemplifies all three of these forms. It is titled “Anti-Imperialism and the Syrian Revolution” by Ashley Smith of the International Socialist Organization (ISO). It’s a remarkable piece of misinformation and faulty analysis.  Because it is clear and well written, it is likely to mislead people who are not well informed on the facts regarding Syria. Hence the importance of critically reviewing it.

Technique 1: Demonize the enemy … “the Syrian regime and its brutal dictator” 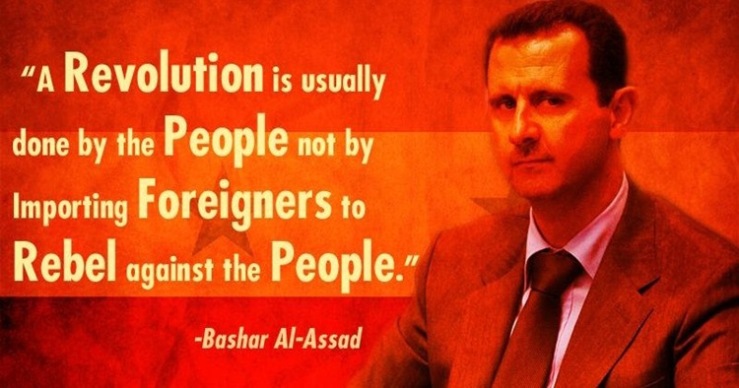 Ashley Smith echoes mainstream media which portrays the conflict as a “civil war” which began with peaceful democratic loving Syrian revolutionaries beaten by a brutal regime.

In reality there was a violent faction from the start. In the first protests in Deraa seven police were killed. Two weeks later there was a massacre of 60 security forces in Deraa.  In Homs, an eye-witnessrecounted the situation:  “From the start, the protest movements were not purely peaceful. From the start I saw armed demonstrators marching along in the protests, who began to shoot at the police first. Very often the violence of the security forces has been a reaction to the brutal violence of the armed rebels.” In the first two months, hundreds of police and security forces were killed.

Technique 3: Attack Those who Question the Dogma … “You’re an Assad supporter!”

Ashley Smith does not criticize the NATO and Gulf states that are violating international law and the UN charter by funding and supplying a proxy army to attack Syria.  Instead, he criticizes left groups who oppose the aggression. That is a sign of how far off track ISO is. They did the same thing regarding Libya and have evidently learned nothing from that disaster. Ashley Smith should go and tour Libya now to savor the “revolution” he promoted.

Ashley Smith’s theme with respect to Syria (peaceful popular uprising against brutal dictator) is the same theme promoted by neoconservatives and the mainstream media.  When they encounter a different perspective,  they cry out, “You are an Assad supporter!”. Never mind that many genuine progressives do not say that. What we say is that it’s for the Syrian people to determine their government, not foreigners.

Global Reseach have chosen this heading

NATO and Israel: Instruments of America’s Wars in the Middle East

NATO and Israel: Instruments of America’s Wars in the Middle East

The North Atlantic Treaty Organization (NATO) is the iron fist of America, Britain, France, and Germany. These four Western nations are the pillars of NATO.

In the post-Cold War era, NATO has become an instrument in support of Anglo-American and Franco-German foreign and security objectives. Although intra-NATO differences exist, the interests of the U.S., the E.U. and Israel — which since 2005 has held a de facto membership in NATO — are interlocked within the Atlantic military alliance.

Two areas in the Middle East have been militarized by foreign powers: the Persian Gulf and the Levant.

In this regard, there have been two distinct phases of militarization in the Middle East since the late-1970s, the first being distinctly Anglo-American, going back to the Iraq-Iran War and the later being a unified NATO endeavour involving France and Germany as key players.

Although the militarization process in the Levant started after the Second World War with the establishment of Israel, NATO’s distinctive role in this process took shape since the launching of the “Global War on Terror” in 2001.

Nuclear Armageddon in the Middle East: Israel to target the Arab World and Iran with Nukes?

According to Norman Podhoretz, one of the so-called intellectual forces behind the foreign policies of the Bush Jr. Administration, in the February 2008 issue of Commentary Magazine, “The only alternative that seemed even remotely plausible to me was that he [meaning George W. Bush Jr.] might outsource the job [of starting a war with Iran] to the Israelis

WHICH PATH TO PERSIA? Options for a New American Strategy toward Iran