Here’s a particularly forlorn historical date: Almost 90 years ago, between the 19th and 20th of December 1917, in the midst of the Bolshevik revolution and civil war, Lenin signed a decree calling for the establishment of The All-Russian Extraordinary Commission for Combating Counter-Revolution and Sabotage, also known as Cheka.

Within a short period of time, Cheka became the largest and cruelest state security organization. Its organizational structure was changed every few years, as were its names: From Cheka to GPU, later to NKVD, and later to KGB.

We cannot know with certainty the number of deaths Cheka was responsible for in its various manifestations, but the number is surely at least 20 million, including victims of the forced collectivization, the hunger, large purges, expulsions, banishments, executions, and mass death at Gulags.

In his new, highly praised book “The War of the World, “Historian Niall Ferguson writes that no revolution in the history of mankind devoured its children with the same unrestrained appetite as did the Soviet revolution. In his book on the Stalinist purges, Tel Aviv University’s Dr. Igal Halfin writes that Stalinist violence was unique in that it was directed internally.

Lenin, Stalin, and their successors could not have carried out their deeds without wide-scale cooperation of disciplined “terror officials,” cruel interrogators, snitches, executioners, guards, judges, perverts, and many bleeding hearts who were members of the progressive Western Left and were deceived by the Soviet regime of horror and even provided it with a kosher certificate.

All these things are well-known to some extent or another, even though the former Soviet Union’s archives have not yet been fully opened to the public. But who knows about this? Within Russia itself, very few people have been brought to justice for their crimes in the NKVD’s and KGB’s service.

The Russian public discourse today completely ignores the question of “How could it have happened to us?” As opposed to Eastern European nations, the Russians did not settle the score with their Stalinist past.

And us, the Jews? An Israeli student finishes high school without ever hearing the name “Genrikh Yagoda,” the greatest Jewish murderer of the 20th Century, the GPU’s deputy commander and the founder and commander of the NKVD. Yagoda diligently implemented Stalin’s collectivization orders and is responsible for the deaths of at least 10 million people. His Jewish deputies established and managed the Gulag system. After Stalin no longer viewed him favorably, Yagoda was demoted and executed, and was replaced as chief hangman in 1936 by Yezhov, the “bloodthirsty dwarf.”

Yezhov was not Jewish but was blessed with an active Jewish wife. In his Book “Stalin: Court of the Red Star”, Jewish historian Sebag Montefiore writes that during the darkest period of terror, when the Communist killing machine worked in full force, Stalin was surrounded by beautiful, young Jewish women.

The Ritual Talmudic Execution and Torture

Real history rather than victors spin teach us that atrocities are committed regardless of occupiers’ nationality, their ideals or ethnicity.

However, there is proven to be just one ethnic-religious ideology that’s gratuitous and hideous depravities cause the crimes of all others to pale into relative insignificance.

RABBINICAL QUOTE: “The efforts of Satan have been successful and they have spread around the Holy Land.” (Toldos Shmuel, v. 3 p. 142).

Wherever they occupied the Soviet Bolsheviks routinely targeted and martyred the most innocent in the most depraved ways. “Vladimir Lenin gave orders to kill as many students as possible in several towns. Chekists (Secret Police) arrested every youth wearing a school cap. Students were singled out and casually killed because Lenin believed the coming Russian intellectuals would be a threat to the Soviet regime.” ~ Vladimir Soloukhin, In the Light of Day, Moscow 1992, p. 40.

The resultant vacuum in the intelligentsia communities was then filled by ethnic Jews. Vladimir Soloukhin revealed that the Chekists were especially interested in handsome boys and pretty girls, who were the first to be killed ~ after intense suffering. The entire Chekist terror was coordinated by the Jewish functionary Joseph Unschlicht.

Beyond normal comprehension is why Bolsheviks in a carefully structured way inflicted upon their victims the most hideous and quite unnecessary cruelties before allowing those martyred to leave their world as tormented souls.

If in some cases victims were beforehand dispatched by a bullet in the nape of the neck, the preferred NKVD method, it was simply because time and circumstance necessitated such industrial methods.

Otherwise, where time and place advantage was in their favour, Talmudic Bolsheviks murdered their victims, children included, by methods that can only be described as an occultist. The mind reels in horror if they chance upon the taboo topic of Bolshevik cruelties and the reasoning behind such gratuitous depravities eludes them.

There is a covert reason why Talmudic Bolsheviks with coerced accomplices sought ever more creative ways by which to kill their victims in the most hellish ways imaginable.

Talmudic Jews consider themselves spiritually elevated on a scale equal to the degree of pre-death suffering inflicted on their victims. This scale of higher spirituality defines levels of priority such as priests, army officers, intellectuals and children. The degree of suffering in their victims is proportionate with the elevation of Talmudic occultism.

How did Talmudic Jews, foremost among the Bolsheviks, go about the slayings? Chekists favoured murder with various and increasingly imaginative methods of pre-death murder.

In his documentary, The Russia We Lost, the director Stanislav Govorukhin told how the priesthood in Kherson was crucified. The Archbishop Andronnikov of Perm was tortured before death.  His eyes were prised out; his ears and nose were cut off.

Bolshevism is not Russian!

In Kharkov the priest, Dmitri was stripped naked. When he tried to make the sign of the cross, a Chekist amputated the priest’s right hand. In Soviet overrun the Bolshevik methods of torture and the inflicting ritualistic murder was openly encouraged.

Several sources tell how Chekists in Kharkov placed their victims in a row. Then, having nailed their hands to a table their torturers cut around their wrists with a knife. Boiling water was poured over the skin was peeled off. This was known as ‘pulling off the glove’.

The Soviet occupation of the Baltic States where these orgiastic tortures were also carried out is clear evidence that Talmudic shamanistic methods of torture and death were uniquely a Talmudic Bolshevik phenomena.

Lithuanian refugee Zite Kaulius wrote in The Advocate, Newark, April 1964: “The Germans were angels compared to the Communists.  “Persecuted Christians came out of hiding.  My father who had been arrested was released by the Germans.  He came home with his hands raw. The Communists had tortured him by plunging his hands into boiling water until his skin came off like gloves.”

To properly understand satanic depravities practiced by Talmudic Jews one is advised to simply refer to the teachings of the Talmud.

All and much more is revealed in TROTSKY’S WHITE NEGROES by Michael Walsh. He says, “The nature of the debaucheries has no equal outside the concept of Lucifer’s teachings. The Talmudic scourge and predisposition towards maximising the sufferings of their victims were not confined to territory but to the peculiarities of the Talmudic mind. Today, the unfortunate Palestinians are treated as abysmally as were their fellow martyrs wherever Talmudic ideology spread.”

“Nowhere in the Talmud is the Star of David an endorsement of the Jews. However, the Bible does reference this to be the Star of Remphan belonging to Moloch (Satan). Most Jews don’t like to admit it but our god is Lucifer and we are his chosen people. ~ Harold Wallace Rosenthal (1947 – 1976). A senior aide to Senator Jacob K. Javits.

From “Monster: A Portrait of Stalin in Blood” 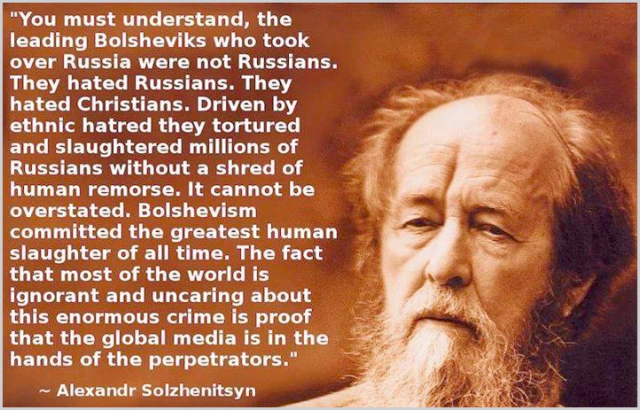